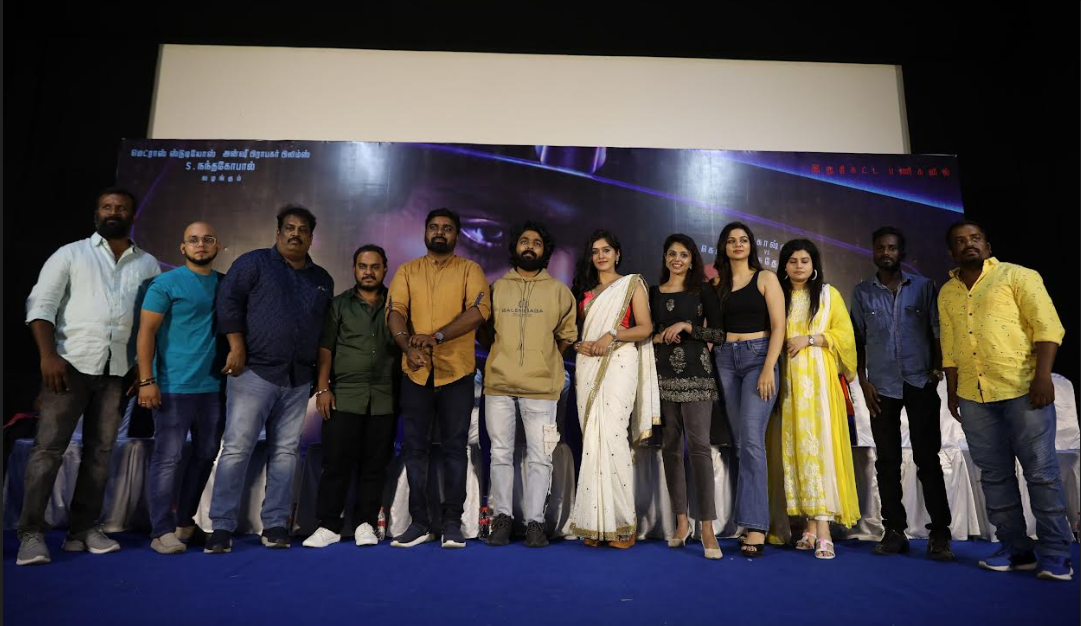 Following the grand box office success of movies like Romeo & Juliet and 96, producer S Nandagopal of Madras Studios in association with Anshu Prabhakar Films is producing the movie ‘13’. A horror-thriller by genre, the film features GV Prakash Kumar in the lead role with Gautham Vasudev Menon essaying a pivotal character. Aadhya, Bhavya, and Aishwarya the female lead characters, have given a fabulous performance. The entire team was present to interact with the press and media fraternity to announce this project.

Producer S Nanda Gopal said, “This is my next production after the movie ‘96’. Just like I was elated and excited while producing it, I am filled with the same positivity while kick-starting this new project ‘13’. The way, debut filmmaker Vivek narrated the script, and the uniqueness, he carried endowed me with more confidence that it has everything to attract audiences from all walks of life. The project was initiated during the COVID times. Just like my previous productions like Romeo & Juliet and 96, this movie ‘13’ too will have good prominence for the story and screenplay with vital characterizations as well. I thank GV Prakash Kumar for his earnest support and dedication to this project. Soon after listening to the script, I couldn’t think of any other actor than GV Prakash Kumar, who I felt will befittingly suit the role. We had decided to work together and discussed many scripts, even before the release of ‘96’, but things didn’t happen. And now, it’s exciting to see that we have finally collaborated on a good and valuable project. He instantly liked the script after listening to the narration. Moovendhar is handling cinematography, Siddhu Kumar is composing music, and he has given a fabulous score for this movie. Castro has taken care of the editing. Santhosh has choreographed the songs and Ram Kumar has choreographed action sequences. We wanted the heroines of this movie to be depicted in content-driven characterizations, and apparently got the talented artistes, who have delivered a colossal job in this movie. Gautham Vasudev Menon isn’t playing the antagonist in this movie, but his characterization will hold the screenplay intact and engaging. I thank him for accepting to be a part of this movie. I believe, the film will witness good results and will be liked by all.”

Editor Castro said, “I thank the producer and director for giving me an opportunity to be a part of this project. The movie has come out really well, and I request everyone to support it and make the movie, a good success.”

Cinematographer Moovendhar said, “This looks like a long-run dream of mine coming true. This project is so close to heart for everyone on the team. GV Prakash Kumar, Producer Nandagopal sir, and director Vivek sir have been a great support, which helped me work better and deliver the best. I thank everyone in the team for this great opportunity.”

Actor Adithya Kathir said, “I was the last one to get on board for this project. GV Prakash sir was great support for me throughout this project. I thank producer Nandagopal sir and director Vivek sir for trusting me and giving me this opportunity. The shooting was held amidst the thick forests, and we faced lots of huge challenges. All the three heroines in this movie have delivered a fabulous job. The technical team has been the pillar of this movie. I believe, this movie will take everyone involved in the project to the next level.”

Action choreographer Ramkumar said, “I can assure you all that ‘13’ is going to be a visual treat for the audiences. It’s been a great experience working with the gem of actors and technicians. I thank producer Nandagopal sir, director Vivek sir, GV Prakash Kumar sir, and everyone for their phenomenal support and dedication.”

Actress Aadhya said, “I thank producer Nandagopal sir and director Vivek sir for making me a part of this movie. It was a great and unique experience working with GV Prakash sir in this movie. Both Bhavya and Aishwarya, who have played the female lead characters alongside me were really supportive of me. The cinematographer has given a beautiful visual treat, which will be definitely appreciated by audiences. The editor, costume designer, and everyone on the team have shown complete dedication. I thank them for the beautiful and best work they have delivered.”

Actress Bhavya said, “Every actor loves to exhibit their potential, and ‘13’ happens to be such a project for me. I thank producer Nandagopal sir and director Vivek sir for choosing me for the role that has lots of scopes to deliver. It was a loveable experience working with GV sir, Aadhya, Aishwarya, and others for being a great support. It was really an amazing and satisfying experience to be working with them. The movie ‘13’ is going to be a lucky project for all of us in the team.”

Actress Aishwarya said, “It’s really difficult for newcomers to get the opportunity. I thank Vivek sir for giving me this chance and making me explore my potential to the fullest. I believe I have given my best, and I thank producer Nandagopal sir for making me a part of this movie. Despite scaling great heights, GV Prakash sir was down-to-earth and treated everyone on the sets equally. The technical team has worked a lot in escalating the best quality of this movie. I am happy for having been a part of this movie, and I believe, everyone will have a great theatrical experience, watching this movie.”

Music director Siddhu Kumar said, “I thank Madras Studios Nandagopal sir for giving me a chance to work in this movie. This is my third movie with GV Prakash sir, and this made me get involved more personally to give the best of my potential for ‘13’. This will be a first-of-its-kind horror-thriller movie and offer a greater theatrical experience for the audiences. I am glad for having worked with filmmaker Vivek, and all of us have given our best to the movie.”

Actor GV Prakash Kumar said, “I am glad and elated that the first look of our movie ‘13’ has been unveiled on the occasion of NTR’s 100th Birthday anniversary. Initially, I and producer Nandagopal sir decided to make a project that had a script written by Vetrimaaran. However, things didn’t take off, due to some reasons, and our discussions pertaining to other projects kept delayed. After a few years, Nandagopal sir approached me with this script and said that it was a horror movie. My instant reaction was to avoid it, but after listening to the script narrated by Vivek, I found it completely unique and different from the stereotypical horror flicks. Besides, the presence of technical experts made the project add more emblazonment to the movie. The three heroines of this movie have exerted their heart and soul into this project. The visual shots were those like filmed by an experienced cinematographer, and never looked as though filmed by a newcomer. Action choreographer Ram has contributed a lot to this movie. My previous collaborations with Siddhu Kumar have been wonderful hits, and I believe ‘13’ will be a good hit as well. Since the entire premise of this movie has so much uniqueness and freshness, all of us wanted to give our best. This is my next horror movie after ‘Darling’, and we have done our best to offer a whole new cinematic experience to the audiences.”
.

Director Vivek said, “Initially, I approached producer Nandagopal sir. I am thankful to both the producer and GV Prakash sir for accepting this script. The three heroines in this movie have equal prominence in this movie. The editor of this film has been in my dream of a cinematic journey for many years. I am glad that, we are here, together with our movie now. The presence of Gautham Vasudev Menon sir has elevated the entire project to next level. Working with GV Prakash sir is like a dream come true for me. The entire technical team – action choreographer, costume designer, art director and everyone have given their best output towards this movie.” 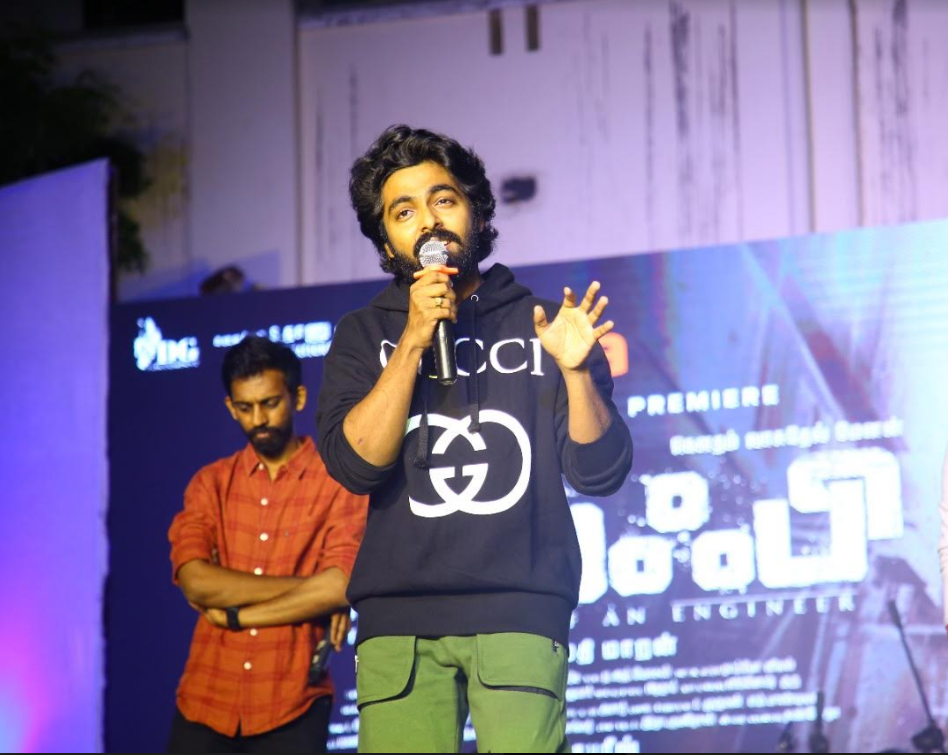