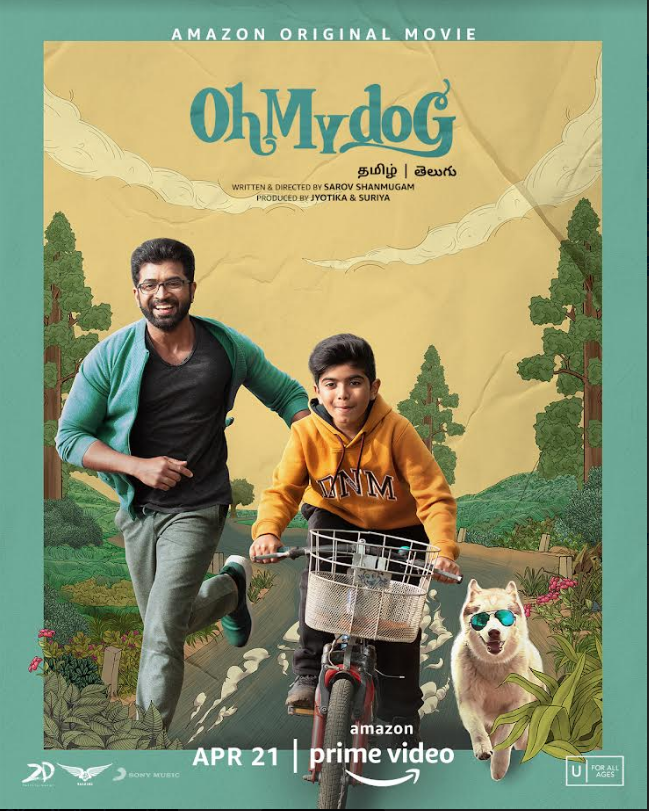 Mumbai, April 6, 2022: Prime Video today announces the exclusive global premiere of the much-awaited film Oh My Dog on 21 April, 2022. Produced under the banner of 2D Entertainment and written-directed by Sarov Shanmugam, the family entertainer brings together three generations of the popular real-life family (grandfather-father-son trio): Vijaykumar, Arun Vijay and Arnav Vijay, who makes his debut as an actor. The film will exclusively premiere in Tamil and Telugu across India and 240 other countries and territories on the streaming service.

A must-watch for every kid and pet lover, Oh My Dog is a heartwarming tale about Arjun (Arnav) and a blind puppy Simba. It’s a film that every child and family will love to watch, enjoy and relate to; the plot delves into their world of desires, priorities, caring, courage, victory, disappointments, friendship, sacrifice, unconditional love and loyalty.

Oh My Dog is produced by Jyotika-Suriya, co-produced by Rajsekar Karpoorasundarapandian and S. R. Ramesh Babu of RB Talkies; music composed by Nivas Prasanna and cinematography by Gopinath. The film is part of the 4-film deal between Prime Video and 2D Entertainment.

This summer indulge in fun with this family entertainer as it premieres in Tamil and Telugu on Prime Video across India and over 240 countries and territories on 21 April, 2022.

Oreo, Waffle, Jo and I, bring to you #OhMyDogOnPrime a film from our hearts to yours, on 21 April @PrimeVideoIN #ArnavVijay #Simba @arunvijayno1 pic.twitter.com/HclXF3r6Ua

ABOUT AMAZON PRIME VIDEO
Prime Video is a premium streaming service that offers Prime members a collection of award-winning Amazon Original series, thousands of movies and TV shows—all with the ease of finding what they love to watch in one place. Find out more at PrimeVideo.com.
● Included with Prime Video: Oh My Dog will join thousands of TV shows and movies from Hollywood and Bollywood, including Indian produced Amazon Original series such as Four More Shots Please!, The Family Man, Mirzapur, Inside Edge and Made In Heaven, and award-winning and critically acclaimed global Amazon Original series and movies including The Tomorrow War, Borat Subsequent Moviefilm, Without Remorse, Coming 2 America, The Wheel of Time, Tom Clancy’s Jack Ryan, The Boys, Hunters, Fleabag, and The Marvelous Mrs. Maisel available for unlimited streaming as part of a Prime membership. Prime Video includes titles available in Hindi, Marathi, Gujarati, Tamil, Telugu, Kannada, Malayalam, Punjabi and Bengali.
● Instant Access: Prime Members can watch Oh My Dog anywhere, anytime on the Prime Video app for smart TVs, mobile devices, Fire TV, Fire TV stick, Fire tablets, Apple TV, and multiple gaming devices. Prime Video is also available to consumers through Airtel and Vodafone pre-paid and post-paid subscription plans. In the Prime Video app, Prime members can download episodes on their mobile devices and tablets and watch anywhere offline at no additional cost.
● Enhanced experiences: Make the most of every viewing with 4K Ultra HD- and High Dynamic Range (HDR)-compatible content. Go behind the scenes of your favourite movies and TV shows with exclusive X-Ray access, powered by IMDb. Save it for later with select mobile downloads for offline viewing.
● Included with Prime: Prime Video is available in India at no extra cost with Prime membership for just ₹1499 annually or ₹179 monthly. New customers can find out more at www.amazon.in/prime and subscribe to a free 30-day trial.